The Shrewsbury Cricket web page is provided as a free service for the people of Shrewsbury, Shropshire. 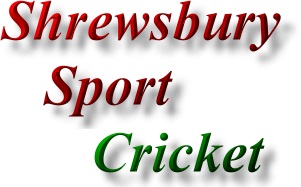